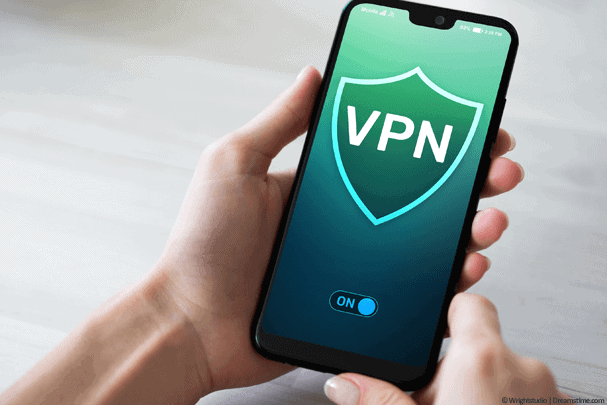 There are plenty of VPNs for Android out there but choosing one is a more difficult affair. In this guide we’ve rounded up the 6 best VPN apps for your mobile and tablet to help you stay secure, unblock content and more.

If you’re an Android user then you’re in good company. In fact, as recently as the middle of 2018 according to Statista around 88% of all smartphone and tablet devices are running some version of Android.

This means that VPN choice is vast on Android systems and with lesser regulation than the Apple app market, for example, the chances of getting a poor VPN app are greater.

ExpressVPN is the best Android VPN app we tested this year but there are other options. If you need a VPN for Android, these 6 are the ones you’ll want to be checking out.

How to choose a VPN for Android?

VPN apps work across many devices but choosing one for an Android device has certain considerations. What’s good for your Windows or Fire TV Stick isn’t necessarily the best for your Android tablet or phone.

Before you look at the best virtual private network for Android further down take a few minutes to consider these specific features. Taking these into account when choosing a VPN will help you get the best for your money.

Keeping your mobile device secure is critical these days as you’re more likely to be out and about when using them. Equally, unblocking services like Netflix and BBC iPlayer on mobile devices has become commonplace.

Below are our Top 6 choices of VPN apps for Android for all purposes. 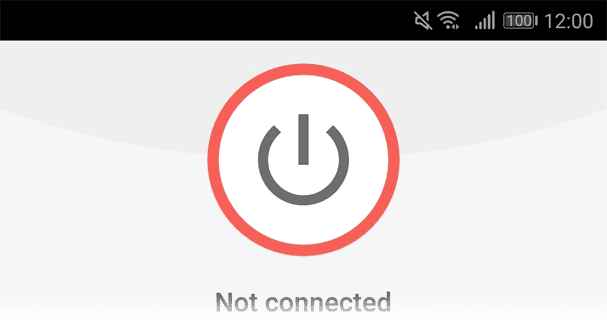 Simplicity is key when using an Android VPN app and ExpressVPN have certainly achieved this with their user friendly app.

Connection can be made right from the main screen of the app by simply tapping the connect button.

There’s also a couple of ‘Recent Location’ options which allow you to quickly connect to some of your favourites. For example, one for privacy and another for unblocking content like Netflix.

Settings are minimal on the app and apart from choosing between TCP and UDP OpenVPN protocols, there are few other customisable security features. The app can however be set to auto-connect when you switch your phone on so you don’t even need to enter the app itself to stay protected on a permanent basis.

You can select from ExpressVPN’s extensive network of VPN locations in over 94 countries which are split into ‘Recent’ and ‘Recommendation Locations’ and also grouped by ‘Continent’ if you need to select a specific country.

The service is covered by their 30-day money back guarantee so you’ve got loads of time to test their strict no logging service in different circumstances across Wi-Fi and mobile networks. 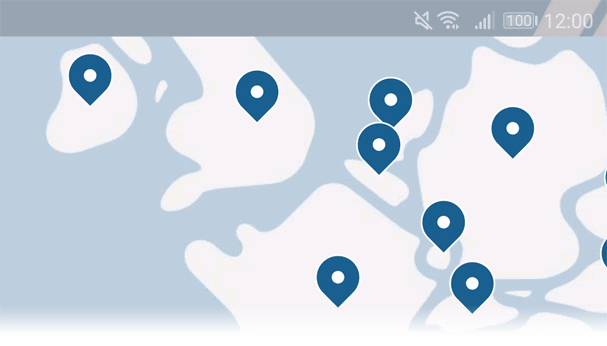 While you can still connect with just one click using their ‘Quick Connect’ option the bulk of the app is taken up by a map view. If you regularly need to connect to a specific country then you’ll find this novel approach to your liking.

You can also connect via a list of countries and even select specific servers to one of their 5,700+ VPN servers. Speciality servers have their own section including P2P, Double-Hop VPN, Dedicated IP and Onion over VPN options. You can also neatly set your Favourites for quick connection.

Behind the scenes, NordVPN will protect you from some malware, phishing and other risks if you wish and there’s a handful of other basic options for you to tinker around with.

The app works well for unblocking services such as Netflix, BBC iPlayer, iFollow and more. Plus there’s a 30-day money back guarantee letting you test the app risk-free. 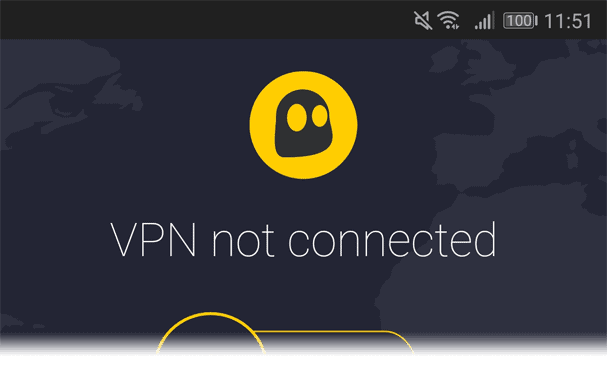 CyberGhost VPN’s Android app looks much the same as their desktop and Fire TV Stick counterparts. If you want to use their service across your range of devices then you’ll really like the simplicity. If you can use one of their apps, you can use them all.

Connection is possible from the main app screen simply by clicking the ‘On’ switch. Although there are available server options just a further click away. These are split into individual countries, favourites and ‘Streaming Friendly‘. If unblocking TV services on your Android device is a top priority then you’ll really love this feature.

You can search and connect to individual servers in locations. Plus add them to your favourites. We really liked this feature because if you find a specific server in a location you love then you’ll always be able to find it quickly in future.

The app also has a built-in ad-blocker, protection against malicious websites, online tracking prevention and a data compression option which may allow you to squeeze a little more data out of your mobile internet service.

On top of an all-round very good Android app, they’ve got the biggest money back guarantee stretching to a mind-blowing 45 days. 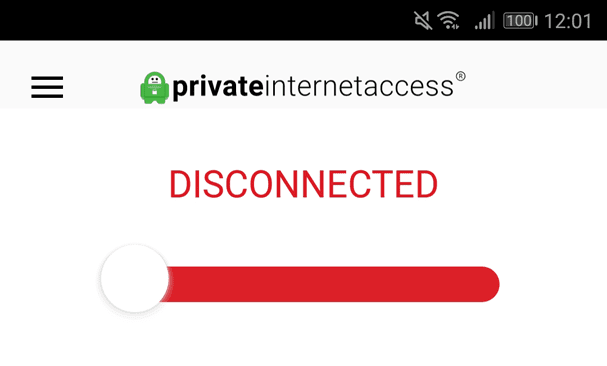 If you consider yourself a bit of a techie then Private Internet Access is the Android VPN app you want to download. Beginners need not apply here and should stick with one of the earlier apps.

Admittedly the interface of the app isn’t the best although it’s definitely functional.

But behind the somewhat lacking user-interface, there’s a feature-rich app which has options that are lacking from most of the competitors. Settings allow you to select the remote port to connect to, which DNS servers to use, what data encryption to use, what authentication, handshaking and more.

There is also a built-in kill switch and other features that block certain types of Android-specific leaks. In all honesty, there are too many options and features to list here.

If you like getting your hands dirty, know exactly what you’re doing or need a higher level of customisation and options then the PIA Android VPN app is the one for you. 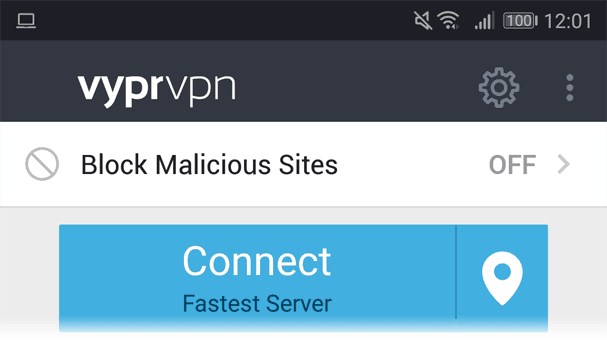 VyprVPN’s Android app is one of the better ones we’ve seen that has a nice balance between simplicity and features.

Servers are broken down into a country listing showing you the speed of each but unfortunately, you can’t pick specific servers which is a nice feature of some of the earlier ranked services.

Behind the scenes there’s enough to keep you interested and not too much to confuse you.

Protocol and DNS options are available but the standout feature for us has to be the ability to exclude certain apps from using the VPN connection. So if you wanted everything to use the VPN service except your Banking app for example then this is possible.

Although VyprVPN previously offered a trial, this is no longer the case. However, they do have a length 30-day money back guarantee available.

6. IPVanish – Gets the job done 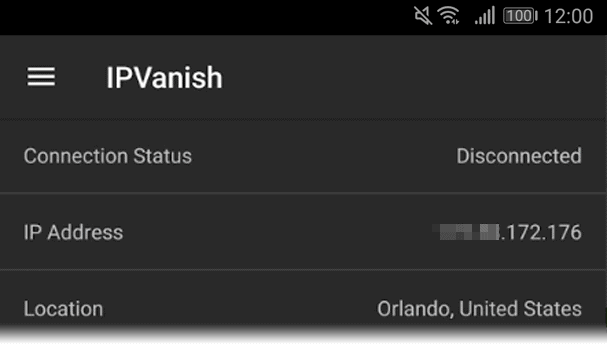 IPVanish’s Android VPN app won’t be winning any awards for its interface as it isn’t the most pleasing to the eye but it does a good job of securing your Android internet connection and that’s the important bit.

Connection can be made easily from the home screen of the app or you can choose different Countries, Cities or even specific Servers.

Behind the scenes you can switch between a UDP and TCP OpenVPN connection. Two other features we found extremely useful was the ability to select a specific port to connect through and the ‘Scramble‘ feature which lets you break through some restrictive networks by disguising the VPN connection.

The Android VPN app looks similar to their desktop and apps on other devices so if you use their service on multiple devices you won’t find it difficult to switch between platforms.

Couple that with their 10 simultaneous connection limit and you can protect not only your Android device but every other device in your household.

Which Android VPN is best for you?

Above we’ve listed 6 of the best VPN apps for Android devices. All work great on both phones and tablets.

The standout VPN for us is ExpressVPN. It has the best balance of simplicity and features. However, choosing a VPN is not an exact science and much of which is ‘best’ will be down to your personal usage.

To help you make a decision on which is the best Android VPN app for you we’ve listed some of the most common uses:

If you want great privacy protection, choose ExpressVPN. With servers in 94 countries, a tested and audited no-log policy and being registered off-shore there really is no better service to keep your usage private while using your Android device.

If you want an app easy to use, get NordVPN. Their app is one of the best designed that we’ve seen. Even if you’re a beginner you’ll be able to navigate your way around and with one-touch connection, it’s impossible to get it wrong.

If you want a feature-rich Android app, take PrivateInternetAccess. This is definitely the expert’s option. With features to select everything from encryption to authentication types, you’ll be in setting heaven.

If you want a risk-free experience, select ExpressVPN, NordVPN or CyberGhost. All three VPN apps offer 30, 30 and 45-day money back guarantees respectively giving you plenty of time to test them for your needs without commitment.

Do these Android apps work on tablet or phone?

All 6 VPN apps ranked above work on both tablets and phones.

It doesn’t matter what type of Android device you have, they’re compatible with all kinds of devices.

The good news is that you can install the app on both types of devices and all of the services listed above allow you to use their service on between 5 – 10 devices at the same time.

This allows you to keep your tablet and phone secure at the same time.

How can I sign up for an Android VPN app?

Most VPN apps don’t allow you to sign up directly in the app itself although some like NordVPN and VyprVPN do.

The best way to get a VPN app for your Android device is first to visit the VPN service’s website directly using a web browser on your tablet or phone. 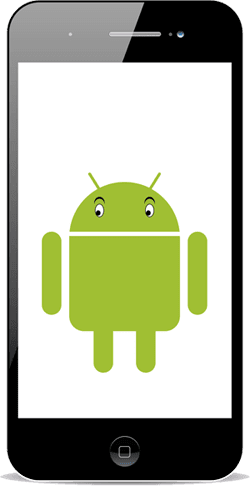 Sign up for their service and then visit the Google Play store. Search for the name of the service you signed up for and download their app.

You’ll then be able to open the app and login with the username and password you created when signing up.

Can I use an Android VPN on mobile data or Wi-Fi?

One of the best features of using an Android VPN is they can protect your connection or unblock content regardless of what type of network you’re connected to.

Using both mobile data or connecting to Wi-Fi is possible with any of the recommended apps above.

Most of the VPN apps will automatically connect when changing network but it’s worth double checking if you’re automatically logged into a Wi-Fi network when it moves between mobile data and the Wi-Fi connection to ensure you’re still connected to the VPN.

You can do this simply by opening the VPN app and checking the connection status, then opening a regular web browser and checking you can access any website.

Choosing any VPN app is difficult regardless of the device you use but choosing one for Android has some unique considerations.

In our tests we found ExpressVPN to offer the best combination of features and simplicity. It doesn’t bombard you with options making it suitable if you’re a beginner but it also has strong privacy protection keeping you secure regardless of your skill level.

Couple that with being able to unblock most TV streaming services and it’s the all-round best VPN app for Android.

If you have time it’s worth checking out the other 5 Android VPN apps because you may find a certain feature that suits your usage.

You really can’t go wrong no matter which app you end up choosing because they’re all great services for Android devices.

Ready to get a VPN? Try our recommended VPN service provider