Chrome OS 79 has been pushed to the Stable channel — that sounds technical, but it means the latest version of Chrome OS is now rolling out. This new release includes a tweak to the last version’s Virtual Desks feature, better window management for touch controls in Overview mode on some devices, a renamed “Apps” section in Settings with per-app permissions and other options, lockscreen media controls, expanded port support in Linux/Crostini, and Chrome 79’s stolen password protection. 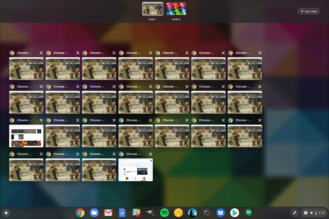 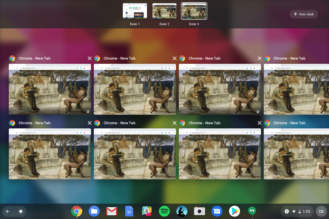 If you use a Chromebook tablet or a 2-in-1 device, then the changes to the Overview menu will come in handy when multi-tasking. In previous releases, the view would just continuously expand to accommodate more windows until they frankly got pretty dinky and hard to see. Now once you hit two rows, it just turns into a sideways-scrolling list. You might see fewer windows at a time, but at least you can see them.

In Overview-related news, Virtual Desks now opens links on the desk you’re currently set to, rather than moving you between them. Previously, if you opened a link in Chrome and had a Chrome window open on another virtual desk, it would switch you to that desk first, but now you can open them on new desktops without being switched back. 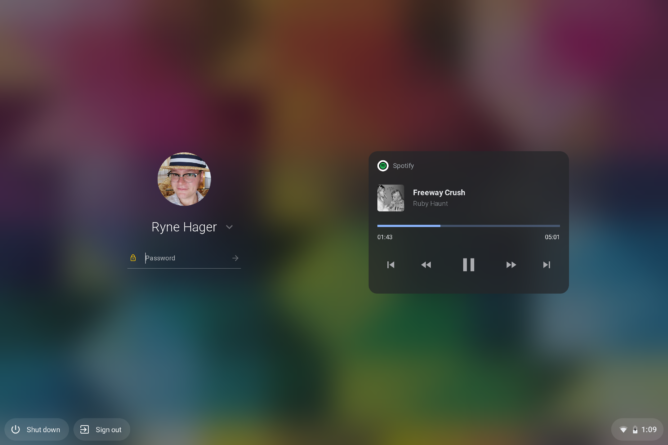 Building upon Chrome 76’s Android-style media controls, Chrome 79 expands them to work from the lockscreen as well. It’s probably a bit of a corner-case, but you’ll be able to control your tunes without having to type your password and log back in — a bonus if you accidentally leave something playing. 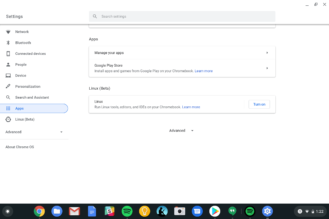 The “Google Play Store” section in Settings has been renamed to “Apps” in Chrome 79 as well, and includes a new “Manage your apps” setting that more closely resembles the granular controls in the Apps section of an Android device’s Settings menu. In it, all of your installed Android apps and Chrome extensions are listed together, with per-app options to manage permissions, notifications, and pin items to the shelf, as you can see below. 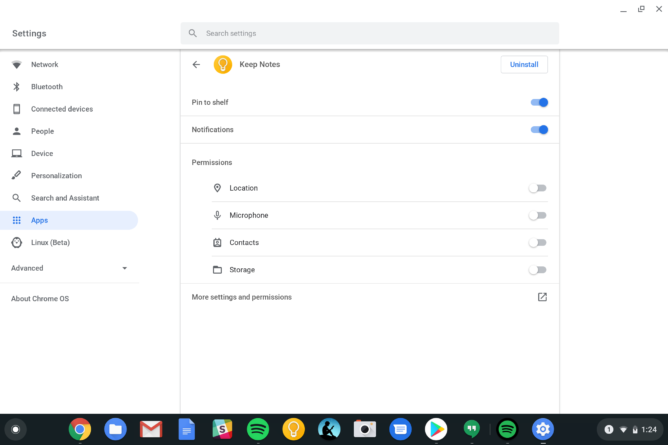 Other Chrome 79-related features like password checkup, which compares secure hashes of your password against known leaks, and formal/stable WebXR support also debut for the platform. The flags for cross-device clipboard sharing, which first appeared on a Canary release of Chrome OS 79, are also live in this Stable channel release, and we can confirm they work now if enabled.

As noted by About Chromebooks, some features previously expected come in Chrome OS 79, like the new tab freezing and tab grouping, didn’t make the cut, though they could land in Chrome OS 80. Expanded support for more ports in Linux/Crostini also debuts with Chrome OS 79, allowing you to use any ports in the Linux container, rather than just a small list of whitelisted ones.

The update should be rolling out to most devices now, though a few like the HP Chromebook 11, Lenovo Thinkpad 11e, HP Chromebook x2, and some education-targeted Chromebooks have the current Stable channel set to a v78 release, at the time of writing, though they’ll probably get it soon.