Etermax has launched its Topic Twister mobile word game on iOS and Android as the company accelerates game launches during the coronavirus pandemic. The new title is Buenos Aires, Argentina-based Etermax’s fifth mobile game launch of the year and reflects its ambitions to rule the word game sector.

That will be tough to do as long as games like Zynga’s Words With Friends and Scopely’s Scrabble dominate the market, but Etermax is no slouch. It’s the company behind long-running hit Trivia Crack, which is the main reason its portfolio has more than 700 million downloads.

“Word, logic, and trivia games, those that help exercise the mind, have always existed,” said Mariano Fragulia, chief product officer at Etermax, in an email to GamesBeat. “At Etermax, we have been inspired by these games to reinvent them and adapt them to today’s technology, whether on mobile, social networks, or even on voice devices such as Google Home or Amazon Alexa.”

Fragulia said each Etermax game has four main characteristics, with simple mechanics that entertain even in short sessions. Most of the games focus on language to enhance cognitive skills (trivia, crossword, word searches, or puzzles). They can connect communities and encourage interaction between people, and they can be launched simultaneously worldwide.

Since the quarantine began, Etermax has registered up to 5 times more downloads in several countries. It also saw an increase in consumption of at least 20% per day over usual rates. For example, the percentage of players challenging a friend to a game grew 50% over the previous quarter in Trivia Crack 2 and Words & Ladders, Fragulia said. 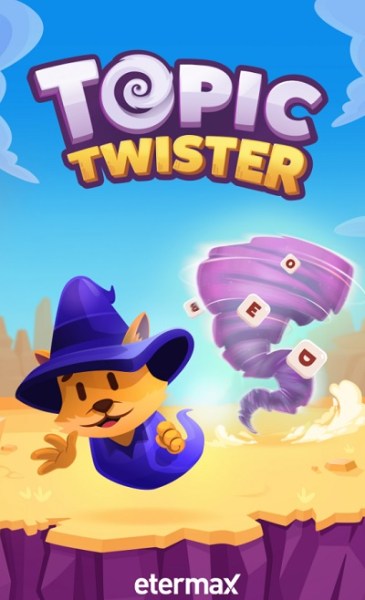 Above: Topic Twister is launching globally in multiple languages.

Inspired by traditional category word games, Topic Twister aims to test players’ language skills. When challenging an opponent, a player must spin the twister and write a word that begins with the assigned letter in each of the five categories, which are presented at random in less than 60 seconds. The player who has completed the most valid words wins the round.

This means you have to know your vocabulary and quickly recall words in competition with direct opponents. You are also measured against players from all over the world through a weekly ranking. After winning games, players receive stars that allow them to move up the ranking to unlock chests. There are 10 initial leagues, and the higher the league a player belongs to, the greater the rewards.

In addition, Topic Twister offers a series of power-ups. You can access these by investing coins from games won or from the daily bonus, as well as those purchased in the integrated shopping store. The power-ups include a chance to find out if the entered word is valid and options to rotate the swirl again to get a different letter, change category, buy more time, or unveil a valid answer by category.

The game is available in Spanish, English, Portuguese, French, Italian, and German.

Fragulia said in 2019 Etermax accelerated its product generation and focused on improving its global delivery of games. By 2020, the company had an ambitious plan to launch six new games in the year. Despite the pandemic, it has already launched five titles this year.

The other games launched this year are Words & Ladders, Word Show, Word Crack Mix 2, and Word Crack 2. All of the games, including Topic Twister, focus on mobile device accessibility, Fragulia said. Working during the pandemic hasn’t been easy, but the company wanted to deliver.

“We reinforced our commitment and responsibility to keep our users connected and entertained with their loved ones while we must be physically separated,” Fragulia said. “Video games, especially social games like the ones we develop at Etermax, have always been a great way to connect with others. In this context, our games are presented as a different way of being close to family and friends and sharing with them a space of entertainment and distraction, bringing new proposals each month so that people of all ages can have fun, socialize, and widen their knowledge and skills.”