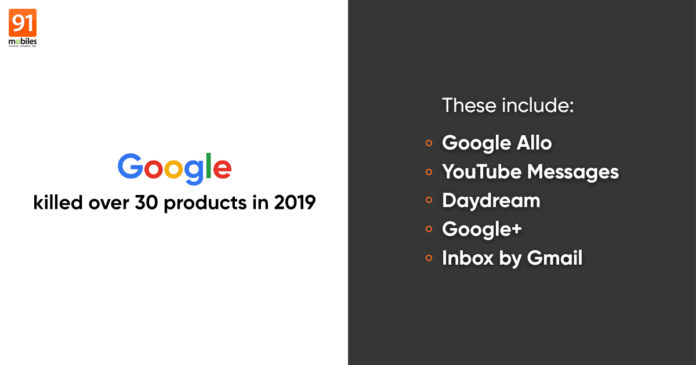 “As many as 32 products, including Google+, YouTube messages, and Google Allo, were laid to rest by the search-engine giant Google”

Google has a history of killing a number of its apps and services every year, and 2019 was no different. In fact, the number of products that made to the Google graveyard this year is the most in the search-engine giant’s history, as per Killed By Google website. If you’re keeping a count, as many as 32 Google products – including  Google+, Google Daydream, YouTube messages, and Google Allo – had to bite the dust. Here’s a list of popular Google apps and services discontinued in 2019:

Why Google discontinues its apps and services

There are a handful of reasons why Google axes its products. One of the reasons could be due to multiple products that look similar such as Hangouts, Allo and Messages. Some of these apps may fail to meet expectations. There are also times when Google integrates some of its services to the main app, thereby rendering the separate app or service futile. Inbox by Gmail, for example. On a few rare occasions, the digital oblivion was just the only logical way forward, as the company continues to reinvent and reprioritise its online strategy.

In line with that, Google is said to add more apps and services, including Hangouts, Google Cloud Print, and Hire by Google, to its graveyard next year. So backup your data (if there’s any) before the products are discontinued.