Reports have been trickling in for the last couple of hours that the stable Android 10 update for the OnePlus 6T has been rolling out — apparently without any fanfare or an associated announcement at the OnePlus forums, as is customary. In addition to bringing all the Android 10 features you can expect, the OxygenOS 10 update for the 6T also includes the company’s Game Space feature and the “Contextual display” ambient display feature.

This timing corresponds to the best-case scenario for the company’s initially projected roadmap, which claimed the OnePlus 6T and 6 would get Android 10 sometime in November. Today, being the first of the month, would be the earliest that could happen. It also follows the Open Beta release late last month.

The full changelog for this update (which mostly matches the previous Open Beta) is just below:

About half of the log, by volume, corresponds to general Android 10-related changes like the new gesture navigation system, enhanced permissions model, and icon shape customization. A few of the features are OnePlus/OxygenOS-specific and new to the 6T, like the keyword blocking in the OnePlus Messages app and the contextual display feature (previously called smart display), which was one of my favorite features our recent OnePlus 7T review.

Update notification and changelog for the OxygenOS 10.0 update on the OnePlus 6T in Oxygen Updater.

As usual, the update is rolling out in a limited fashion for the time being. None of my own devices see it on their own. Some have had luck pulling it down using a VPN to connect to one of OnePlus’ test markets, like Germany. You can also grab the update for the 6T right now via the third-party Oxygen Updater app (also available on APK Mirror). Note that there are a few reports of image verification failing upon download, though I didn’t have an issue, myself.

It’s a pretty big update in size, too, clocking in at around 1.8GB for what we assume is the full image. You might want to get on Wi-Fi before you pull it down. (Update: Reports appear to indicate the converted T-Mobile units don’t have a problem this time around, though YMMV.)

At the time of writing, the update doesn’t appear to be rolling out for the older OnePlus 6 just yet, though historically updates come to the pair of phones at around the same time. More anecdotally, my OnePlus 6 doesn’t see any available update in either settings or Oxygen Updater, and reports online appear to be limited to the 6T for the time being. (Update: The Oxygen Updater developers have told us that XDA’s coverage was in error.)

We’ll be sure to let you know when the update is spotted in the wild on that device, or if an official announcement lands for the update.

The update has been officially announced on the OnePlus Forums. It’s a staged rollout coming to a limited number of devices today, then ramping up to all users in a few days once OnePlus is sure there aren’t any critical bugs.

Rollout for the OnePlus 6 may have hit a snag and could suffer a small delay, though.

Rolling out to OnePlus 6 following delay

The update is FINALLY rolling out for the OnePlus 6 as well. We can confirm that the download is now available in the Oxygen Updater app on our own devices, and it should be slowly rolling out via the traditional means as well.

Update may be paused pending a bug-fix build

The update may be paused pending a new build, based on some information provided over the last week on OnePlus’ forums. The company is frustratingly non-explicit with the details, but a recent weekly update thread has revealed that the update still has yet to roll out globally. “The team is working on a new build with more issue fixing, and they’ll release it once it’s ready (from partially to globally). Your patience is much appreciated.”

It isn’t immediately clear if the rollout has actually been paused/pulled, or if the company is restricting it to certain markets until it can fix whatever issues are present. There have been reports of a wide variety of problems on the Android 10 update for the phones, including SafetyNet verification breaking, picture-in-picture breaking, third-party launchers crashing, and general stability problems, all among a much longer list.

We’ve reached out to OnePlus for more information, as well as explicit confirmation if the update has been pulled/paused, but we have yet to receive a response. If and when we get more information, we’ll let you know.

New build expected as early as next week

In yesterday’s “Weekly Update,” a OnePlus staff member revealed that a fixed version of the OnePlus 6 and 6T’s Android 10 Update may start rolling out as early as “next week” (probably meaning this upcoming calendar week, given the statement was made on a Saturday). This is all assuming that this new update passes CTS — in other words, if it doesn’t have anything wrong with it.

This is getting to be quite a long, drawn-out story, but we’ll let you know just as soon as we spot the update rolling out.

Hopefully, we’re drawing near the end of OnePlus’s now multi-month OnePlus 6/6T Android 10 saga. A new hotfix update has been spotted rolling out in the form of Oxygen OS 10.0.1. , (Update: The official announcement has been made) it’s available now via Oxygen Updater for both devices.

The update changelog for the 10.0.1 hotfix on the OnePlus 6T.

There were several reports of issues with the original Oxygen OS 10.0 update (mentioned above in previous updates), but presumably, this new version fixes at least some of them. According to the incremental update’s changelog (above), fixes for the fingerprint sensor bug and connectivity issues are included, among several others. It’s still just the October security patches, so OnePlus is two months behind as of this release, though it’s better than being four months behind, as many owners were until now.

If you don’t see the update on your own devices — likely, since it’s in a slow rollout — you can pull it down early via Oxygen Updater. However, if you’d prefer to manually install it yourself, we’ve also got download links (again, courtesy of the folks at Oxygen Updater) to both the incremental update and the full update for those still on older versions:

Once downloaded, you can install these images via the manual installer in Settings -> System -> System updates -> the cog icon -> Local upgrade, just be sure to delete them later once they’re installed. Alternatively, you can wait for it to land on your device naturally. That might be the wise choice, in case there are any new issues with this release like there were with the last one.

OnePlus is now rolling out yet another iteration of the Android 10 update to the OnePlus 6 and 6T, this time it’s version 10.3.0, and it comes with a number of significant fixes, including adding Digital Wellbeing to the phone. 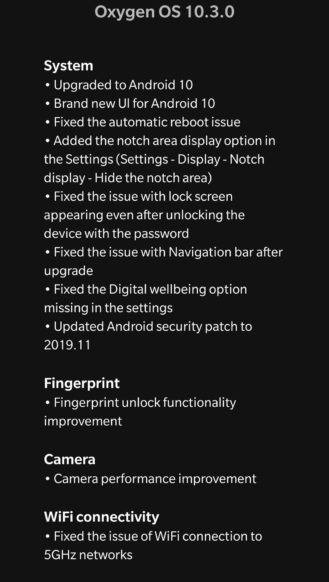 At this time, there are no files available to download, though it does appear the update is available for both phones if you check using Oxygen Updater. The official changelog is below.

Other changes in the update include adding an option to hide the screen notch area (by blacking it out), as well as fixes for issues like 5GHz Wi-Fi connectivity, stuck lockscreens, and problems with automatic reboots and the navigation bar.

The official Oxygen OS 10.3 ROMs for the OnePlus 6 and OnePlus 6T are now officially available for you to flash at your leisure. These updates include the features and bug fixes listed above, like a new Android 10 UI, camera performance improvements, the November 2019 security patch, and more. 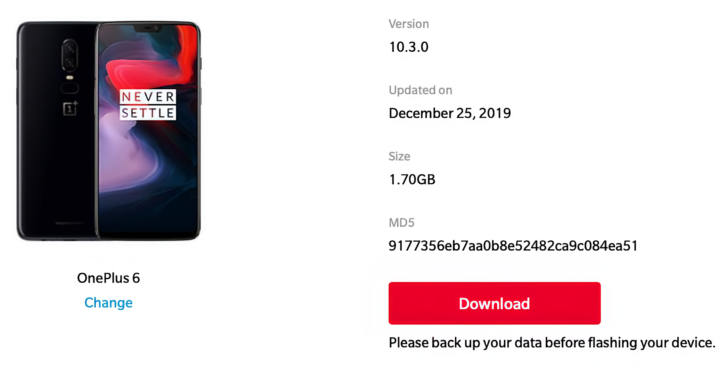 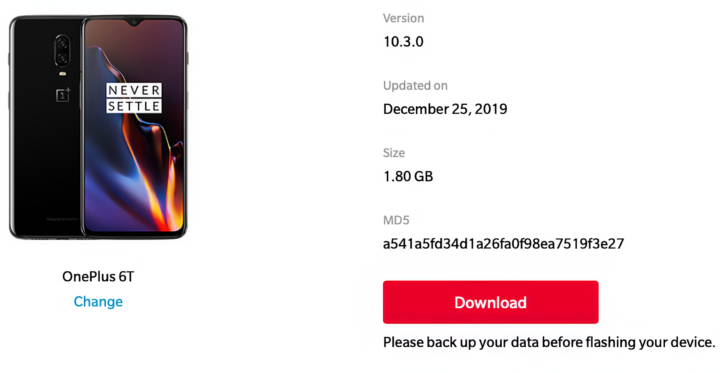