Google Stadia has for some time camped on critics’ lips and for the right reasons. The search giant has been accused of unveiling what is basically a beta product to the masses due to the missing core features at launch.

Most of Stadia’s core features were given a “coming 2020” release date and with over six weeks since the game streaming service arrived, it seems we are in for a good year of growth for Stadia. Besides picking up two more games for Stadia Pro players, the game streaming service is set to gain some much-needed feature parity. So far, the various platforms that support Stadia have some differences in the feature set available, but this is about to change for the good.

Wireless Stadia Controller for desktops and mobile phones, support for more Android and iOS devices, Android TV support, in-game Google Assistant, support in more countries, and further improvements to Stadia Store are just a few of the changes Google is reportedly lining up.

Unfortunately, it could take ages before some of these changes are effected officially. On the brighter side, though, some enthusiastic players have been taking matters into their own hands in an effort to improve the gaming experience on Stadia.

Not long ago, Redditor AquaRegia gave us a tool that adds a Game filter to Stadia on the web. Now, the same developer has come up with yet another set of scripts that lets you monitor your Google Stadia stream for things like time, latency, session time and data usage, among others. 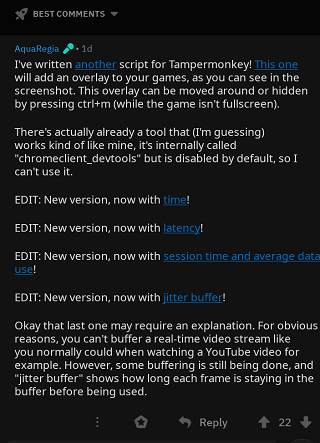 To make life easier, another Redditor, Mafrans, picked up these multiple scripts and made a Google Chrome extension, just like this one here, that brings forth all functions provided in the scripts by AquaRegia.

I love Stadia, but feel it has been lacking a lot of important features would improve my experience greatly, so I made a chrome extension. It has relatively few features at the moment, limited to game filtering, a clock, and network monitoring, but I am working hard to expand them.
Source

You can download the Chrome extension here and follow the steps below to install it on Chrome for desktop.

1. After downloading the zip file in Google Chrome, navigate to chrome://extensions.
2. In the top right, click the switch to enable “developer mode”.
3. Drag the zip file anywhere into the extension window. Once done, you should be able to see more details about the current Stadia stream, as seen in the image below. What’s even more promising about these Stadia tweaks is that soon players will be able to improve stream quality on Chrome by forcing VP9 decoding instead of H.264. There’s a lot going on under this Reddit thread regarding this tool, so you may want to check it out for more details.